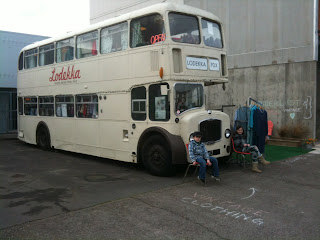 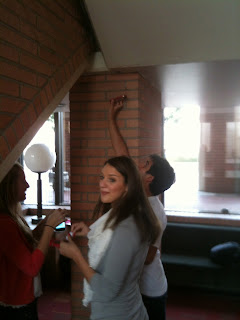 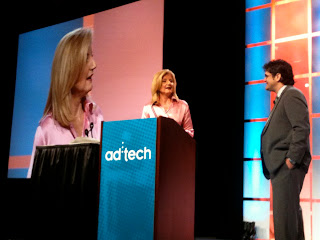 Posted by Kathi Inman Berens at 3:19 PM No comments:

Posted by Kathi Inman Berens at 4:25 AM No comments:

This blog is moving to kathiiberens.com

I'll tantalize you by saying I've just posted there a vid created by some of my students this morning in our class, COMM 499 at USC Annenberg.

The students shot this vid impromptu, after kicking off class today with a discussion of prohibition of devices in the classroom, distraction and attention.

Click here to be taken right to the video.  See you at the new site!
Posted by Kathi Inman Berens at 12:58 PM No comments:

People have emailed me to ask about "F2F in the New Media Classroom," an advanced social media class I'm teaching at USC's Annenberg School of Communication starting 23 August.

So I made this 6 min. video overview. It discusses why


Those of you who read my post about The Flipped Classroom know that I believe that everything that can be moved OL should be.  OL can deliver experiences that are themselves uniquely valuable: some killer guest speakers are slated to Skype in, for example.

What remains in the physical classroom is the unique value of F2F: embodied, thrilling, spiritual, ephemeral.  My version of the classroom is face time ++.  The students and I will amble outside classroom walls to snap photos on campus to gather assets for our first lesson in visual composition; we'll visit LACMA, view street art, engage with locative digital art in situ, wander.  Digital flaneurs.  I've had Baudelaire unshakably in my head for months as I've dreamed up this class.

Posted by Kathi Inman Berens at 4:39 PM No comments:

Building the "About": Coding Changes How & What I Teach 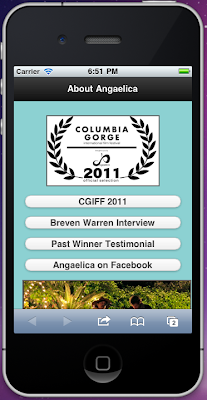 I've been thinking about how learning to code changes what I think is important to teach.

Here at the end of my post-doc fellowship at the Mobile Tech Research Initiative, I'm building an "About" page in jQueryMobile for the Columbia Gorge International Film Festival.  Finally, I'm seeing what I've learned about code authoring syntax translate into keystrokes.  That's a big deal.  Groking is one thing.  But when it comes to building, it's like I'm seated at the piano bench, trying to find the right finger placements before I can play my song.  My fingers had to learn how to do this.  Honestly.  I can't explain except to say that there's a kinetic quality to the learning to code that was completely beyond my apprehension ten weeks ago.  I spent time shoving concepts and tags into my brain.  It didn't matter, none of it mattered, until I learned how to type code by, say, opening and closing a tag quickly, then spacing to insert the specific calls.  I used to type exactly the sequence.  Now I type in syntactic blocks.  Without the typing, I wouldn't know anything.  It feels hubristic to claim I know anything at all.

The vulnerability of making bonehead mistakes, especially if you're a professor and are hanging out your total ignorance  like undergarments drying on the community line, can stop you in your tracks.  A few of the Fellows in MTRI do not, will not code.  They work their tails off collaborating, editing and generally "getting" code.  They are vital to the process.  But they are not pushing the keys and sitting alone in front of the screen.

Here's why it's a mistake not to try.

Waaay back in 2002, my pal Norah Ashe McNalley and I got a USC Innovative Teaching grant to start an online student journal, which our founding editors named AngeLingo.  (Two years ago, AngeLingo was rebranded "SCribe.") Our first coder, Jason, was charged with building the site over the course of an entire school year.  Everything was HTML: CSS hadn't been invented/adopted yet.  Jason--one hell of a coder, by the way, who went on to build games for Dreamworks, etc., etc.--procrastinated epically.  Norah and I didn't know enough about code (read: we knew zilch) to understand just how far, far behind Jason was in the build.  At that cultural moment, before crowdsourcing and Wikipedia, before pervasive broadband and YouTube videos that explain anything you want to know, it was impossible to educate ourselves.  Without the intervention of our code-savvy husbands (and without growing a pair: my first lesson in management) AngeLingo would have died.  Over the years, AngeLingo has published hundreds of student-authored and -edited academic essays, stories, poems, songs, movies, and the like.  Back in 2003, we tripped on how amazing it was to publish without the need for print, paper and $$$$.  In 2011, as smartphones make publication a daily, common, WYSIWYG experience, we're in another watershed moment.  Faculty need more than a little code literacy (hat tip to Douglas Rushkoff) to give students a learning experience they can't get on their own.

Do faculty need to know how to code?  Is it a nice to have, or a gotta have?

At the Modern Languages Association's 2011 Convention (see my post-convention overview here), Stephen Ramsay declared "Do you have to know how to code? I’m a tenured professor of Digital Humanities and I say ‘yes.’. . . Personally, I think Digital Humanities is about building things. […] If you are not making anything, you are not … a digital humanist.”  See Stephen's summary of his MLA talk here.  This comment rippled through the field in the weeks subsequent to the MLA.

(For more on the DH "to code or not to code" debate, see Stephen's thoughtful clarification "On Building," Matt Kirschenbaum's ADE piece "What is the Digital Humanities, and What's it Doing in English Departments?" and Marilee Lindemann, who is "supremely uninterested in determining whether or not I am a Digital Humanist." Of course there are many other resources, to which Matt's piece can lead you.)

Returning to the "About"

My magnificent partner in this summer's appland, Jeannette Altman (cellist, code and Illustrator teacher, perfectionist, goof), has created almost the entire app for the CGIFF.  "About" is my foray.  Jeannette is gray-eyed Athena, building not one interactive map with the Google Maps API, but *ten*: one for each venue at which the films will show in two weeks.  We'll see if we can get it all to sit still in such a light little app.  Messing around with her has been one of the highlights of this unbelievably cool summer. (Check out, btw, MTRI's rich resources page, loaded with all kinds of goodies: a little souvenir from our summer trip.)  God bless Creative Media and Digital Culture Program Director Dene Grigar for insisting that stuff on the web should be free & shared.

I now know enough about code to appreciate that it's an accomplishment to be playing even one note at a time.  I'm really happy to make something tuneful no matter how slowly.  An echo of that song "Fill In the Words" sung by Robert Klein in the 1979 musical They're Playing Our Song has been plunking lightly in my ear.  He taps a C on a kiddie piano: "You play a C, you get a C.  That's simple.  That's easy..." (It's a quiet, introspective little number: no YouTube vid to show you. Here are the lyrics.)

As I set my syllabi for the advanced social media classes I'll teach in August at USC and at Washington State University, I am modeling the daily activities on what we've done at MTRI.  Building teaches differently than conceptual work.  Conceptual work equips students to make sense of the task long after the urgency of a particular build is finished.  There's a shelf life for the skills.  (One example as an index of how quickly it's moving: the jQuery Mobile code updates frequently: you have to check daily to make sure your header files are current.) Conceptual work allows students to forge the important critical thinking that John Seely Brown and Doug Thomas extol in A New Culture of Learning.  It's vital.

But I would say that I'm with Stephen Ramsay on this one.  Learning how to build rewires your sense of how things work.  As I said, it's in the fingers, this knowledge.  There's some kind of recursive loop between the fingers and the brain. Please indulge me this long quotation from Stephen's piece "On Building": I read it in January and loved it then.  But now my fingers know it to be true.


As humanists, we are inclined to read maps (to pick one example) as texts, as instruments of cultural desire, as visualizations of imperial ideology, as records of the emergence of national identity, and so forth. [...]  But making a map (with a GIS system, say) is an entirely different experience. DH-ers insist – again and again – that this process of creation yields insights that are difficult to acquire otherwise. It’s the thing I’ve been hearing for as I long as I’ve been in this. People who mark up texts say it, as do those who build software, hack social networks, create visualizations, and pursue the dozens of other forms of haptic engagement that bring DH-ers to the same table. Building is, for us, a new kind of hermeneutic – one that is quite a bit more radical than taking the traditional methods of humanistic inquiry and applying them to digital objects. Media studies, game studies, critical code studies, and various other disciplines have brought wonderful new things to humanistic study, but I will say (at my peril) that none of these represent as radical a shift as the move from reading to making. [Emphasis mine.]

The Flipped Classroom: Exploiting the Best of F2F & Screens

As you watch this video overview, ask yourself two things:  1) why was the Flipped Classroom was borne of collaboration, not by one teacher alone?  2) How does it exploit the unique properties of F2F learning in the digital era?

Jonathan Bergmann and Aaron Sams are high school chemistry teachers in Woodland Park, Colorado.  They create video podcasts of their lectures which students watch outside of class via laptops, mobile devices, tablets or DVDs.

This means that students can access the lectures on-demand.  They control the pace of information delivery, which they can't do F2F.  Crucial: screens allow MORE student participation in their knowledge acquisition, not less.  This is obvious to many of us working in the field, but remember that we are still a tiny subset of educators.  High school students in my local school district are FORBIDDEN to bring any screens the classroom: there's still a deep distrust of screens as portals to distraction or cheating, and the false but abiding sense that occasional distraction is inherently a bad thing.

In the Flipped Classroom, students come to class primed to do the applied problem solving, what we typically call the "homework." Instead of struggling in isolation, learners work the problems in small groups.  Peer-to-peer  engagement in quite natural in this setting.  The teacher, as master tutor, wanders around answering questions and sparking further engagement in the problem solving.

Maybe "homework" no longer means that "work you do at home," but "the work" you do IN CLASS that drives the concepts "home."

The takeaways for the superiority of hybrid learning environments are pretty obvious:


Silent work in a F2F classroom punishes learners for their natural inclination to share and collaborate.  It mistakes the animation of collaboration and its occasional "distractions" as barriers to serious knowledge acquisition, rather than the bursts and rests of how we think/work in real time.  Ever get up from your screen to go make a cup of tea?  Even looking up from your screen and staring into the far distance for a minute can refresh your attention and enable greater focus and retention.

Why do you think the Flipped Classroom was borne of collaboration?  Drop me a comment and I'll tell you what I think too!
Posted by Kathi Inman Berens at 9:37 AM No comments: 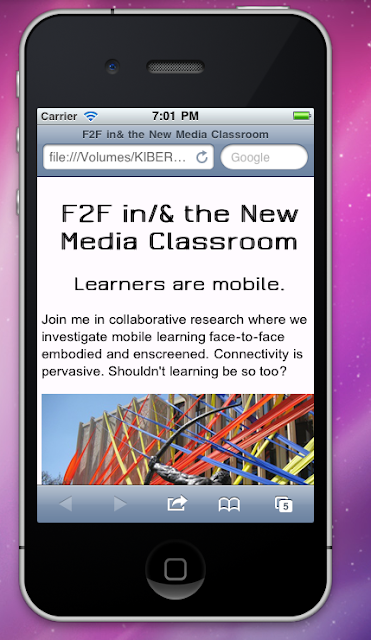 Posted by Kathi Inman Berens at 7:07 PM No comments: